The new H2020 ROBINSON project has been funded by EU. It is coordinated by ETN and under the responsibility of Prof. Ferrari Mario L. for TPG.

Prof. Mario L. Ferrari at the final meeting of the Bio-HyPP project

Prof. Mario L. Ferrari at the Kick-off Meeting of the NextMGT Marie-Curie project

TPG gave its important contribution, as coordinator of the maritime table, for the development of “Piano nazionale di sviluppo mobilità Idrogeno Italia”; the Italian National plan for sustainable mobility with Hydrogen.

Prof. Massardo at Cranfield University as a member ofVIVA Committee for the Ph.D. defense of Mr. Alozie, Ogechukwu Godwin.

Prof. Sorce in Poitiers to discuss a proposal of Innovative Training Networks within the Marie Sk?odowska-Curie actions

SUPEHR’19 Conference in Savona (IT)

All the TPG staff involved in the organization of SUstainable PolyEnergy generation and HaRvesting – SUPEHR 2019” Conference during 4-6 September 2019, at Savona (Italy)

TPG at WP meeting for ENVISION

Ing. D. Rattazzi and Ing. I.Rossi represented TPG during the WorkPackage meeting for ENVISION project, led by EDF, in Paris

Prof. A. Traverso and F. Roncallo in Brussels for PUMP-HEAT General Assembly and review meeting.

Ing. Rattazzi and Ing. Rossi represented TPG at the 3rd GA Envision in Sassenheim, the Netherlands

Francesco Guidetti visiting TPG
Francesco Guidetti, former CEO of many big companies and currently consultant of the Board of major multinational corporations, visited TPG to discover more about our SPIN-OFF (H2BOAT and SIT) 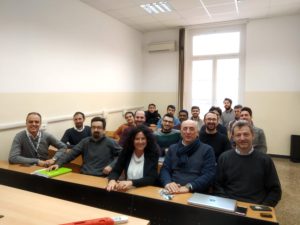 Prof. Ferrari at the Research Council of Norway (Oslo) for the Panel meeting.

H2Boat exhibits at the V027 booth at Sailing World

13th-14th september 2018: Prof M.L. Ferrari and L. Mantelli participated in Vasteras at an intermediate meeting of the Italy/Sweden project

Ing. Lamberti interviewed for the “il secolo XIX” talks about the activities of H2Boat and the joint laboratory with Fincantieri

16 March, Derby: Prof. Massardo at the of the JU FCH Scietific Committee at Brussels

Prof. Massardo at ERC for the Initial Panel Meeting of CoG 2018

A. Sorce at KTH in Stockholm for WP1 Pump Heat meeting

Bilbao, 7-8 February: Prof. Massardo at Satlantis as member of the Etichal Committee of EU H2020 Project

Prof. Ferrari M.L. at TUDelft for a visit related to international teaching program

Prof. Massardo at the first meeting of the JU FCH Scietific Committee at Brussels

Prof. Massardo at the first meeting of the JU FCH Scietific Committee at Brussels, January 25th 2018

Massardo and Lamberti at the programme review of the FCH JU

Massardo and Lamberti at the Stakeholder Forum of the FCH JU

Prof. Massardo is a new member of the  Scientific Committee of the Fuel Cells and Hydrogen Joint Undertaking (FCH JU)

TPG is on display on the ETN NEWSLETTER

Prof. Traverso participates in the fifth conference organised by EDA: Consultation Forum for Sustainable Energy in the Defence and Security Sector

Prof. Massardo and Ing. Lamberti at the “H2 and Fuel Cells in maritime applications“

Bio-Hypp meeting in Genoa and Savona: 26-27 of May

The TPG presents the results of its work at the meeting, concluding with an experimental demonstration

F. Roncallo participates in the fourth conference organised by EDA: Consultation Forum for Sustainable Energy in the Defence and Security Sector, which will take place from 16-18 May in Lisbon (Portugal)

Prof. Massardo is a new member of the Liguria Academy of Science and Letters established in 1789 in Genoa

Prof Massardo at Spanish Ministry of Economy in Madrid

Prof Massardo in Madrid as a member of the International Evaluation Panel of “Severo Ochoa Centers and Maria de Maetzu Units of Excellence”, Call 2016

Sorry! No news is available for this year

“Genoa,February 14, 2015: TPG is in the first six research groups of University of Genoa ranking.”,”

Are you looking for a Thesis? Check out the updates at our Thesis Proposal Section! – http://localhost/proposte_tesi.php

[Genova] – SeaSpoon WEC is operative in the Gulf of Genova

“[Italy] – May 2014 – The innovative thermoelectric generator from the TPG, qb_HOT, reaches the final stage of the EDISON START Italian Contest”

Bruxelles – August 2014: new H2020 Energy contract for TPG,”TPG has been appointed of a new H2020 contract in the field of Energy named METH-CO2.
This is the first H2020 project for the TPG and probably for the whole Plytechnic School of University of Genoa.
Prof. Loredana Magistri is the TPG scientific responsible of the project.”

“Genoa, June the 3rd 2012: 8th anniversary of the Rolls-Royce UTC launch at University of Genoa”

Rolls-Royce announced that LG has invested $45 million to acquire a 51% shareholding in Rolls-Royce Fuel Cell Systems (US) Inc.

“Perugia, November 22-23: prof. Massardo at the National Workshop on Fuel Cells and Hydrogen”

“Genoa, March 1st, 2011: Fausto Crosetti left TPG to work at Generelia in the field of renewables”

“Genoa, May 16th: New contract for TPG from Rolls-Royce FCS”

“Genoa, April 21, 2010: Michele the son of our researcher Cecilia Torti is born today !! congratulations from all the TPG people”

“TPG @ the Low Emissions Advanced Power systems workshop (LEAP) at the US Department Of Energy site (NETL), July 20-22 2010 . Alberto Traverso and Francesco Caratozzolo were invited to present TPG’s skills and recent achievements in the fi”

“Genoa, August 8th, 2010: Article on Secolo XIX Newspaper regarding UTC activities”,Today the newspaper Secolo XIX has published an interesting article regarding the Rolls-Royce Fuel Cell Systems activities in the past six years and the future goals.

“Genoa, October 7th, 2010: TPG day at TPG lab”,”On Thursday 7th October at the TPG lab a meeting with all the TPG researchr is planned to discuss present and future activities. “Krakow (PL), October 13-31: Prof. Massardo at AGH for the BIO-SOFC Marie Curie Project”

“Genoa, March 1st: Prof Massardo member of the International Advisory Board of 12th CIMTEC”,” INTERNATIONAL CONFERENCES MATERIALS AND TECHNOLOGIES – CIMTEC 2010 will consist of the 12th International Ceramics Congress (June 6-11, 2010) and of the 5th Forum on New Materials (June 13-18, 2010). Prof. Massardo has been nominated member of the International Advisory Board of the Symposium FC  Fuel Cells: Materials and Technology Challenges of the Forum on New Materials, co-chaired by Dr. Bert Rietveld (The Netherlands), Prof. Prabhakar Singh (USA), Dr. Harumi Yokokawa (Japan) and Prof. Tianshou Zhao (Hong Kong). ”

“Genoa, May 25th: Technical Meeting of the FISR Project on H2 generation from Coal”

“Bruxelles (B), December 4th: Prof. Massardo at the final meeting of the EU Project Large-SOFC”

Genoa 17 January 2008: Technical meeting of the contract with ERG

Genoa 14 March 2008: Meeting between TPG and Eni in the frame of FISR project on H2 production and utilisation

“Genoa 9 April 2008, TPG receives a new award from ASME for the paper GT2007-27135″,”The paper, GT2007-27135 *Time Characterisation of the Anodic Loop of a Pressurized Solid Oxide Fuel Cell System* authors A. Traverso, L. Magistri, F. Trasino and A. Massardo has been selected by the ASME-IGTI Cycle Innovations Committee as a Best Paper award winner from ASME Turbo Expo 2007”

“Genoa, 21 May 2008: Ing. Prandoni and Guagliardi of Cesiricerca at TPG for Combined Cycle Flexible Use Seminar”

“Genoa, 4th July, 2008: Dr. Simone Grosso former TPG member is the recipient of Elsag Award for the best Ph.D. Thesis in the field of Industrial Engineering at University of Genoa.”

“Bruxelles, 13-16 October: Dr. A. Traverso participates at the ETN conference on the “Future of gas turbine technology””

“Genoa, 10 October 2008: Dr. A. Traverso in collaboration with ENEA has organised the seminar on Photovoltaic Plants”

Davide Bernardi moved from TPG to RRFCS,” Davide Bernardi Ph.D. Candidate left TPG for RRFCS where is at the moment Fluid Dynamic Engineer. All TPG people thank Davide for his support to the development of activities carried out by TPG for RRFCS in the last three years. ”

25-1-2007: Rolls-Royce UTC Directors seminars in Derby (UK),” Prof. Massardo, director of Genoa UTC ans Dr. Jenny Racah Head of the Research and Technology Transfer Office at University of Genoa will be present at the annual meeting of the Directors of Rolls-Royce University Technology Centres. The meeting, planned January 25 Derby (UK, is an assembly of some of the world’s top engineering academics that came together in late January at a seminar held annually by Rolls-Royce for the Directors heading the company’s network of University Technology Centres (UTCs). UTCs are vital in providing technology support for product development in addition to fundamental research. They operate with Rolls-Royce as long-term strategic partnerships and many centres operate on a network basis, sharing capability and working on joint programmes.

29-1-2007: EU signed a Marie Curie contract ( En-SOFC) with Rolls-Royce Fuel Cell Systems and TPG,” Rolls-Royce Fuel Cell Systems (coordinator) and TPG signed January 29th a Marie Curie Transfer of Knowledge Project, entitled: Engineering Balance of Plant for Pressurized SOFC Hybrid (EnSOFC), MTKI-CT-2006-042298. The contract will last for four years (2007-2010), and 2 professors, 2 researchers and 6 Ph.Doctors from Genoa will work for years in UK, while 6 RRFCS employers will spend several months in Italy.
The main technical aspect covered by the contract is the development of BoP for SOFC Hybrids. ”

February-march 2007: Dr. Alberto Traverso and Dr. Loredana Magistri are involved in the Marie Curie Project En-SOFC with RRFCS,” Dr. Alberto Traverso is spending one month in Loughborough (UK) at RRFCS in the frame of Marie Curie En-SOFC project. Dr. Traverso is working on transient modelling of RRFCS hybrid system (1 MW). Dr. Loredana Magistri will spend two weeks in March in the same place to develop analysis of innovative SOFC based Hybrid systems in collaboration with RRFCS. ”

New TPG paper for the Journal of Fuel Cell Science and Technology in collaboration with National Fuel Cell Research Center – Irvine California,” The paper “”Gas Turbine Assessment for Air Management of Pressurised SOFC/GT Hybrid Systems “” by A. Traverso, A. Massardo, R. Roberts, J. Brower, S. Samuelsen, and based on the collaboration between TPG and NFCRC – Irvine California through exchange of researchers (Dr. Alberto Trverso and Dr. Rory Roberts) will be published in the ASME TRANSACTIONS Journal of Fuel Cell Science and Technology, vol 4, May, pp. 1-11

“May 4, 2007 Pisa: Meeting with ENEL in the frame of Regione Veneto Contract about H2 utilisation in GT”

“Montreal, may 15th, 2007: Dr. Ferrari, Mr. Pascenti and Prof. Massardo of TPG received the Best Paper Award from ASME-IGTI for the paper”

“Montreal, May 14th, 2007: Dr. Loredana Magistri is the new Vice Chair of the Cycle Innovations Technical Committee ASME-IGTI for the years 2007-2009”,

Genoa May 24-26: TPG will be present at Fiera Energethica

“Genoa, May 30, 2007: M. Cannarozzo Ph.D Student at TPG is the recipient of the Award”,” The Electrochamical Division of the Italian Chemical Society, during its meeting held in Padua (Italy) on May 11th 2007, has decided to award Dott. Ing. Marco Cannarozzo with the Thesis Prize 2007 ?Photo Analytical SRL? for his Degree Thesis, titled: Effects of Mass Transport on the Performance of Composite Electrodes for SOFCs
Thesis for a Degree in Chemical Engeneering, University of Genoa, February 23rd 2005, tutor Prof. P. Costamagna, co-tututor Dott. Ing. Simone Grosso. The Prize will be delivered on July 18th 2007 in Cagliari (Italy), during  the Conference GEI-ERA 2007. ”

” 1st June Stockholm: Dr. A. Traverso, M. Porta and A. Franzoni are working at Gasification Test Rig of KTH”

“Genoa, 4-10-2007: New Research Contract with Ansaldo Energia in the field of CC diagnostics”

“Napoli, 5-6 November 2007: Dr A. Traverso and A. Franzoni Ph.D. Student will participate at the Mid Term meeting of the FISR Projetc coordinated by Pisaricerche (H2 from Coal)”

“Pisa, December 18: Enel Res. Centre, F. Ghigliazza and A. Franzoni at the First year meeting of the project”

News on RRFCS UTC: Secolo XIX 22 August 2006,” Recently, the Italian newspaper “”Secolo XIX”” dedicated one article (in Italian) to the description of the ITC and TPG. Read it at the bottom of the following address: http://localhost/TPG_demo.php or download it at: http://localhost/allegati_tpg/IlsecoloXIX-22082006.pdf

TPG is partner of a new Integrated Project FP-VI: EU signed December 8th the LARGE-SOFC IP contract,” The contract 19739 for the LARGE-SOFC project was signed on 8 December 2006 by the Commission.

“TPG is partner of ENEL in the first Hydrogen Power Plant project in Italy (Porto Marghera) sponsored by Enel, and Regione Veneto.”

April 1st-2005 —— kick off meeting of the IP Project Felicitas

We use cookies to ensure that we give you the best experience on our website. If you continue to use this site we will assume that you are happy with it.OkRead more
Scroll to top