The TPG is developing an innovative layout and control scheme to avoid the need for any high temperature valves, thus featuring lower costs and higher reliability, demonstrating it at laboratory scale.

The TES is made by five ceramic honeycomb modules (fig.1), and it is being integrated with a slip stream from the 100 kW mGT already present on site, while the solar input will be physically simulated with electric heaters.

The resulting layout allows to avoid any high-temperature valve (800-900°C). Moreover, only one regulating three-way valve (2) and one on/off three-way valve (3) are needed. This result is achieved using the high-T orifice, which is a calibrated flange with a desired pressure drop.

Indeed, the three-way valves are subject to the compressor outlet temperature, at which conventional materials can be employed. In this respect, the bottom segment between the compressor and the combustor is called the “cold side” of the plant, while the top segment is called the “hot side” (800-900°C).

Such a concept promises low cost and high reliability, despite introducing permanent pressure losses due to high-T orifice.

Charging and discharging phases of the TES are regulated thanks to three-way valves (valve 2 and 3) and a control based on temperature and mass flow thresholds. This system is capable to store a portion of the solar heat collected by the CRS, so it can be used to preheat the air between the compressor outlet and the combustor inlet, like a recuperative cycle.

Along the storage medium inside the regenerator it is desirable to have a steep temperature gradient between the hot side and the cold side of the plant. So, two threshold temperatures, a low and a high one, can be defined to manage the switch between the charging and discharging phases. 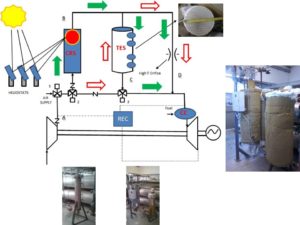 Reboli Tommaso
We use cookies to ensure that we give you the best experience on our website. If you continue to use this site we will assume that you are happy with it.OkRead more
Scroll to top